More than a metric: How measuring attention drives sustainability 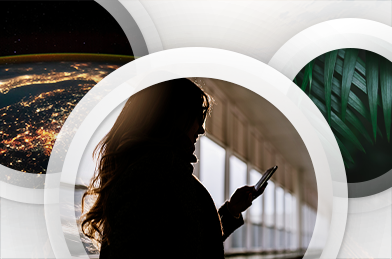 Sustainability; the topic that’s got everyone’s attention. So what’s the industry doing about it? Aside from the well trodden path of office sustainability, many are looking towards the efficiency of their advertising campaigns, specifically carbon emissions against attention, Invibes included.

Invibes is already taking large strides towards its sustainability goals by reducing energy consumption associated with Invibes’ campaigns by 10% every year for the next 3 years,1 as well as introducing the Invibes Carbon Neutral Label initiative which offers brands the opportunity to run sustainable, carbon neutral campaigns.

But how exactly does sustainability relate to attention and how does Invibes help? Well, first we need to look at impressions - one of the industry’s most commonplace ROI metrics for ad campaign success.

According to Forbes the average person is exposed to 6,000 - 10,000 ads daily. Yes, daily.2 But naturally our brains struggle to process that many ads, so many ads often wash over us. In fact, Dentsu Aegis Network’s research into The Attention Economy revealed that only one third of ads get audience’s full attention.3 Which is not just a challenge for advertisers, it also has a significant impact on the environment. Here’s why.

Simply put, it takes a lot of energy to serve an ad, and energy equals emissions. A single ad impression can produce 1g CO2e, which might not seem like much on its own, but when you think how many impressions a single campaign can generate, the grams start to add up. According to Ebiquity, the average of digital ad emissions is reported to be around 670g CO2 per 1000 impressions based on the 116bn display ad impressions tracked.4 This is backed up by other reputable studies finding emissions from similar digital ad campaigns are also sitting at several hundred grams per 1,000 digital ad impressions. And these emission figures rack up exponentially when you look at how many campaigns even a single advertiser or agency runs in a year. The numbers are in the trillions.

However, there are things we can do to make positive change within the industry. The increasing use of attention as a key campaign metric actually has the opportunity to spell good news for the environment. It’s a quality over quantity move that stands to not just benefit the environment but the advertisers who adopt it and even consumers. Here’s the rundown:

Attentive time spent is closely correlated with an increase in brand recall so for environmental reasons it’s even more important to really focus on the right people in order to gain their attention rather than taking a ‘catch-all’ approach trying to get as high a number of impressions as possible. Streamlining campaign approaches not only benefits the planet, budgets will benefit too by getting higher quality engagements from the money spent. Less really can be more!

Invibes works to capture real attention beyond impressions, as well as fewer ‘unseen’ impressions through high-impact formats that are:

When put to the test against industry benchmarks by Lumen, Invibes formats were proven to generate 4x more attention than standard display and 8x more than social.5 But it’s not all in the formats, Invibes’ smarter targeting additionally minimises the carbon impact of campaigns by boosting campaign effectiveness and optimising impression numbers. Additionally, Invibes’ in-feed advertising campaign emissions currently generate on average 15% less CO2 per 1,000 impressions than industry benchmarks set by the data company fifty-five, specifically for standard display campaigns.6 In grams, that sits at 26.1g vs 30g CO2 respectively. However with the combination of Invibes energy and carbon reduction goals as well as the Invibes Carbon-Neutral Label initiative, that number is set to reduce greatly over the next few years.

All in all, while the advertising industry has been responsible for high emissions numbers, the spark of impactful change on a global scale is igniting, as many begin to take steps in the right direction. As for attention, its role within the advertising is cementing fast as the industry recognises the benefit of high-attention rates driving more efficient advertising for the good of the industry and the planet. The future is bright.

Want to find out more about Invibes’ Carbon-Neutral Label initiative or how Invibes captures consumer attention through innovative formats and targeting? Get in touch!